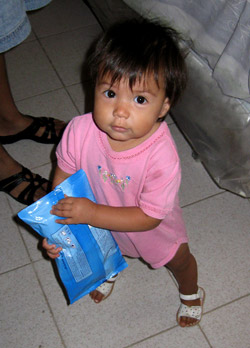 It’s a bit dusty with temperatures in the mid-80s. The breeze keeps it fairly cool. This is the first time I’ve been here at this time of year, and it certainly feels very comfortable outside. Not the sweltering humidity and occasional torrential rains like you get around January.

Jadzia and I slept in Monday, but Yoli and Ludi both woke up fairly early. We didn’t really get going until about 11 a.m.

We are staying at El Jordán, which is a support center for girls who have lived on the streets. Yoli volunteered here when she was single, and we had our religious wedding ceremony on the upstairs patio here in November 2003. Our apartment this time is on the left side of the patio. The one we have stayed at twice before, on the right side of the patio, is now being used as a temporary leather workshop for boys. I went in there today looking for a three-prong electrical outlet and marvelled at the strong smell of cowhide and all the machines and tools. This is an exciting new ministry for El Jordán, which has long desired to offer learning opportunites for the husbands/boyfriends of the girls who come there.

Anyway, we got the girls and headed out to catch a bus. Let me tell you that taking a bus with two daughters instead of one is definitely a challenge. We found seats in the back of the bus. I enjoyed watching Jadzia experience things as if for the first time: the bumpy ride of the bus, the lurching as it swerved to the side of the street to pick up passengers, the noise of the traffic outside.

As we neared our destination, the bus passed many universities. Soon it was packed full of students. When it was time for us to stop, we had to maneuver our way through the crowd of passengers. I had Jadzia under one arm; a bag and a stroller under the other. I wonder if I’ll get really good at this by the time we leave.

We walked the rest of the way to Yoli’s sister Eliza’s house. Eliza and her husband Boris had just renewed their wedding vows the day before.

Jadzia was disappointed to find none of her cousins at home. They were all at school. She was shy with her tia Eliza, tio Boris, and abuelita Lucy. She wasn’t speaking, just waving (and sometimes waving with the hand whose thumb was planted in her mouth). 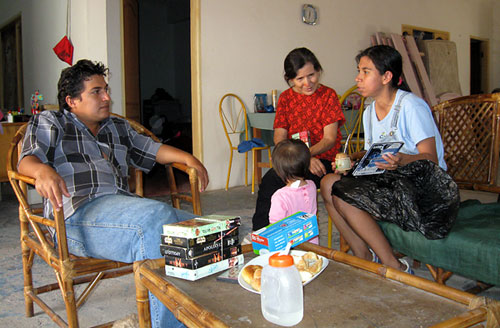 Eventually the kids came home. Jadzia was still somewhat shy, but her cousins weren’t. They were very friendly. Melany, Rebeka, and Daniel all gave Jadzia kisses and started to play. Rebekita especially liked Jadzia. They are almost the same size, though Jadzia is taller (and a year younger). 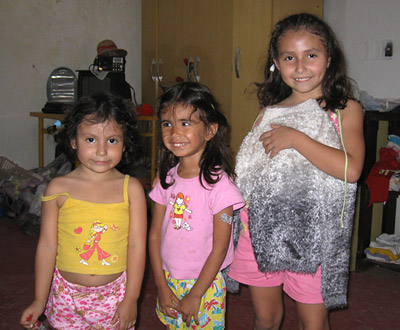 While we were eating lunch (beef milanesa with rice), Yoli’s sister Noemi arrived with her newest baby, Genesis (pronounced HEN-eh-sis). She was very cute, and looked a lot like Ludi. You can judge for yourself in the photos.

We stayed late, and it was past nap time for the girls. We took the bus home and put Jadzia to bed. Ludi wouldn’t sleep at first. Since Yoli needed to go out and buy some ingredients for baking a cake, it fell to me to deal with Ludi. I eventually fell asleep with her on my chest, laying on the love seat. After I woke up, I had to come up with a way to get her into her playpen to continue sleeping. She cried when I put her down, so I gave her one of Yoli’s shirts. That did the trick.

Yoli spent the afternoon and evening preparing cakes for Jadzia’s birthday party, which will be Tuesday. After sunset I took the girls downstairs to play with some of the kids at El Jordán.

Jadzia took a bit to warm up to the kids. She was just kind of sitting on the ground clutching her doll. I was talking with some of the kids, some of whom I remembered from previous trips. Ludi had no problems walking all over the place, picking up leaves, carrying soccer balls, etc. Eventually Jadzia and I were kicking the soccer ball around with a little boy named Caléb. We also played with the two dogs who live at El Jordán, Lulu and Charlie.

After everyone went home, I took Jadzia to buy some lomito sandwiches from a restaurant that is literally around the corner. It’s one of our favorite things to eat in Bolivia, though it probably wasn’t a great choice on my part for Jadzia. She enjoyed watching them cook the meat and assemble the sandwiches.

2 Replies to “Dust in the eyes? Must be winter”