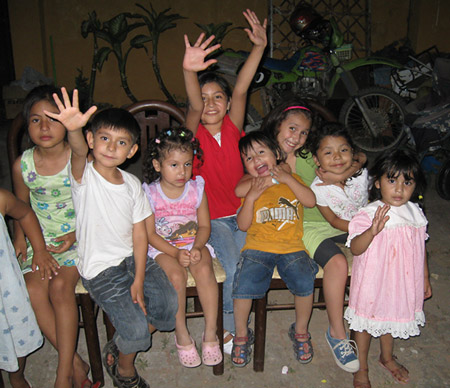 This year Jadzia has enjoyed one of the longest periods of birthday celebration enjoyed by anyone outside of the Queen’s Diamond Jubilee. She had her first birthday party on Aug. 12, in conjunction with Yoli’s and my dad’s birthdays. Her actual birthday was Aug. 24, which we spent traveling to Bolivia. We had a party for her on Tuesday to which all her cousins and a few friends were invited. 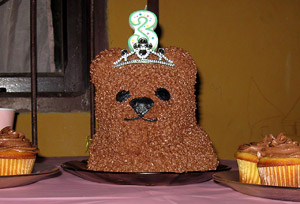 Yoli had baked a three-dimensional bear cake on Monday. Yoli was somewhat disappointed because it didn’t grow as much as she thought it would. Since the cake bakes upside down, that meant he didn’t have much for legs. Instead the cake was like a bust of a bear. We brought the cake with us to Yoli’s sister Noemi’s house to decorate. It took Yoli a while, but the bear turned out well. 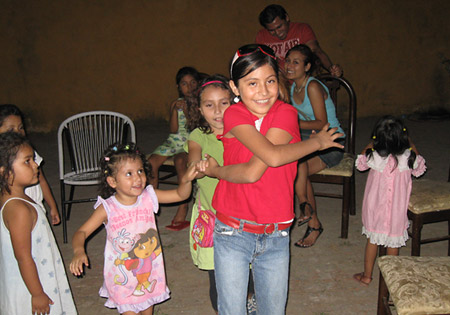 After a while, Jadzia’s cousins began to arrive. They all greeted her nicely, but of course they couldn’t really understand what she’d be like. And she was a bit shy. Jadzia can speak Spanish, but she’s not used to interacting with children in Spanish — pretty much only with her mom and sometimes her dad.

Something else I have known for a while but really saw Tuesday night was that Jadzia is not as physical as other kids. For example, two girls wanted to play jump rope with Jadzia. They were going to swing the rope and they wanted Jadzia to jump. I intervened and explained to them that Jadzia can’t jump. Then, just to be silly, I told them that I could jump, and I began to hop up and down. Then Jadzia interjected “I can jump!” And she did this skip/gallop thing. When I heard her say that, I felt bad for having interrupted, because I didn’t intend to make her look bad or to discourage her, though in fact that is probably what I did.

As more and more kids and parents arrived, and as the kids started to get a bit more wild, Jadzia got more and more shy. We gave her a princess crown, but it didn’t really change her mood. Then, seeing her crown, Jadzia’s cousins Abi and Raquel went to get a Barbie princess DVD they owned. We popped it in the player and soon almost all the kids gathered round to watch. I was surprised that even the boys were watching. But I guess the Tube is the one thing on the earth capable of causing all conflict to cease and uniting all mankind. 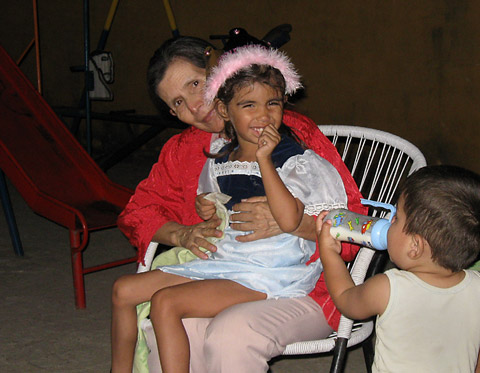 After a bit, Yoli explained there had been some miscommunication. We had expected that there would be food at the house, since we were bringing cake and desserts and goody bags, etc. But there was not. So Yoli’s brothers-in-law, her dad, and I went out to get some hot dogs and buns.

When we got back, the guys went to cook the hot dogs and I resumed filming the madness. At this point a bunch of kids were crowding onto this little slide and slamming into each other, over and over. It was the world’s worst perpetual slide traffic jam.

As all this was going on, Jadzia was sitting by herself on the swing next to the slide on the swing set. As the kids next to her got raucous, Jadzia decided to make herself heard. She began counting her numbers in Spanish, over and over, each time more loudly. It was quite a scene.

Once the hot dogs were ready, we passed them out. Jadzia’s mood improved dramatically after eating a hot dog. Seems that much of her shyness was really just hunger. Unfortunately she also got mustard all over her beautiful blue dress. 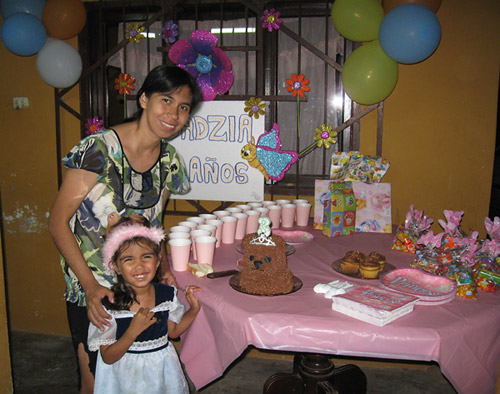 Finally came the birthday songs and eating the cake. All the kids gathered round Jadzia and the cake table to sing “Cumpleaños feliz.” It was really beautiful!

Jadzia even was given some presents, which I had not expected. But that made her day, because I suspect she was expecting gifts. The other nice thing is that now she has a few more books and a toy or two to play with her at the apartment while we stay in Bolivia. That is a very good thing.

By the end of the night, Jadzia had tried to use some Spanish with people. I think by the end of the trip, it won’t be a problem. I have noticed her using it more and more. But she gets very shy each time we go to meet people or have an outing and it takes her a bit to warm up. 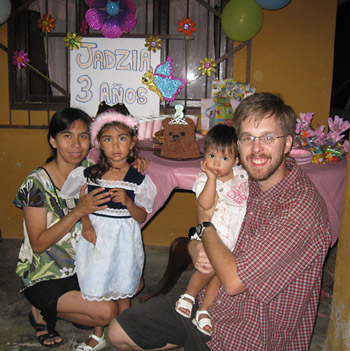 One Reply to “Semi-bilingual birthday bash”