Thursday was Yoli’s birthday and her dad insisted we have a big meal of salteñas to celebrate. So we came over in the late morning to his place so Yoli could watch/learn/help him prepare the food.

A big wind had kicked up that lasted all day. Dust was flying all over the place. It was Ceti Alpha V come to life.

(How do you like that for a Star Trek II: The Wrath of Khan reference?) 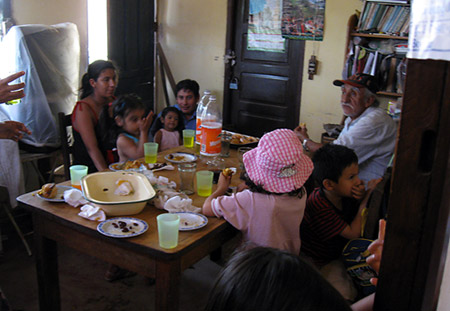 The dust and wind was enough to make us dirty. But the girls were pretty much playing in the dirt most of the day. By the time all was said and done, they were filthy.

Anyway, the family gathering was fun. Yoli suspected that some of her siblings (and their kids) wouldn’t show up, but actually everyone we were expecting did indeed come — and it was a good thing, too. Don Hector prepared an enormous quantity of salteñas. Probably enough to feed the neighborhood. (He told Yoli his figures included the estimate of 3 salteñas for each child — a little much)

Don Hector doesn’t have near enough seating for his huge family, so we all sort of ate standing up. “Like soldiers,” he said. It worked just fine, because salteñas are easily eaten standing. 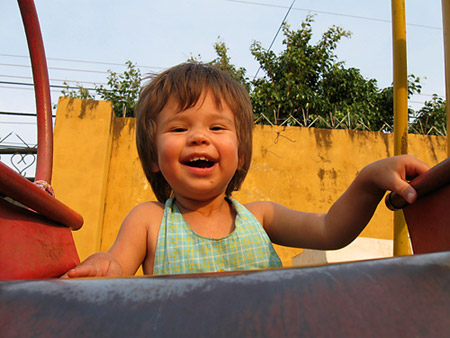 Later we went over to Yoli’s sister Noemi’s house for tea time and a visit with Yoli’s friend Gina. The girls had fun with their cousins and friends on the slides and teeter-totters.

It was a long day. Yoli and I were very tired. But the kids were totally filthy, so we spent another hour or so after we got home bathing each of the four children. After their baths, each girl required combing to get out the monstrous tangles. There was lots of crying and screaming.

But finally at 11 p.m., everyone was asleep except for Mamá and Papá. Time for us to bathe, relax, and watch a movie together. What an exhausting day!