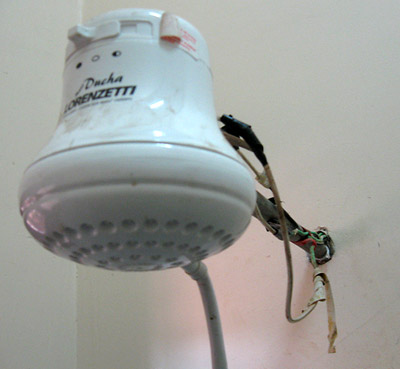 Back in 2003 when I first visited Bolivia, I wrote several times about the electric showerheads they use here. The one in my bathroom at that time was particularly pesky.

I know I have new readers now who are completely unfamiliar with the idea of an electric shower, so I thought I’d step you through it.

So why do they use electric showerheads in Bolivia? Well, almost nobody has a water heater. When people need hot water, generally they just boil it on the stove. So if you want a hot shower, you have to heat the water electrically. This is done using a special showerhead. There is usually a switch somewhere near the shower that turns it on and off.

I have taken many electric showers around the country over the years. Some of the showerheads do a decent job of heating the water. But it comes at a price: low pressure. The way you control temperature is by adjusting the water pressure. Want it hot? Turn it on as low as possible. Want to make it colder? Increase the water flow.

Of course we are talking about the possibility of mixing electricity and water, so there is some danger. The wires on these showerheads are always exposed, and are usually wrapped in some electrical tape.

In every shower I have used, after starting the shower if you touch the valve handle, you will receive a mild shock. I get around this by wrapping my hand in a towel or the shower curtain to turn off the water. At our apartment here, there is a handy luffa which I can use to stay un-shock as I turn off the valve. 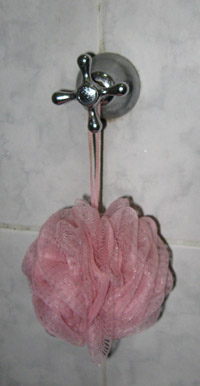 Truth be told, this one is pretty good. The water can get very hot if you leave the pressure very low. The one we had in Samaipata was almost worthless, lukewarm at best. The one I had back in 2003 at the seminary would get hot, but it would also cut in and out for no apparent reason (I could tell when this was about to happen by a change in the hum of the overhead flourescent lighting). 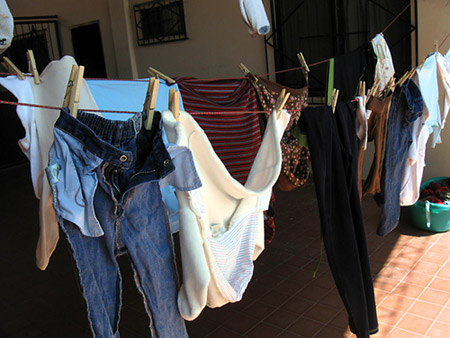 No secret here… We use a washing machine to wash them, then hang everything out to dry. It is winter time now, so there is an abundance of strong wind. Things dry fast. In the summer time the problem is rain. It rains so much (and so strongly), that it is ideal to have clotheslines under a roof. 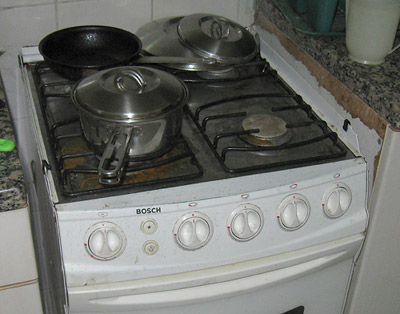 Most stoves in Bolivia are powered by propane tanks. That’s right, propane tanks. Exceedingly few people have gas pipes to supply their homes, though I have seen such homes.

Yoli’s dad sells refilled propane tanks to his neighbors at his kiosko.

Or you can wait for the day of the week when the propane guys come through your neighborhood on their truck. You pay them, and they switch your empty tank for a full one. But it pays to find someone reliable, because some vendors will partially fill the tanks with water to trick people. 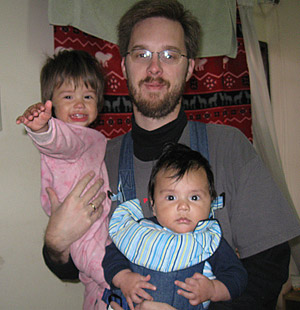 Joseph would cry unless he was held, and Josie was in the midst of a crying fit that wouldn’t seem to end. The older girls were doing whatever loud activities they were doing. I was reminded of Frank Costanza’s refrain on Seinfeld: “Serenity now!!”