We decided to visit Tio Adonay’s crypt at the cemetery on Wednesday morning. Yoli’s sister Sara came over with her son César, and she would take us there.

We decided to eat lunch together first since we were already so close to lunchtime by the time we got going. Yoli had been making tomato sauce from scratch that morning, since it’s so hard to find Italian-style tomato sauce at a reasonable price here (if you ask for it at a kiosko, they’ll give you something more like tomato paste).

The cemtery was a very long bus ride away. It is close to Santa Cruz’s older and smaller airport, El Trompillo, which is inside the city.

When we got there, we found out that there has been a recent change of policy. The cemetery now has visiting hours — and is closed from 11:30 a.m. to 2:30 p.m. We arrived at 2 p.m., and the guard wouldn’t be talked into letting us in, so we had to sit around and wait. 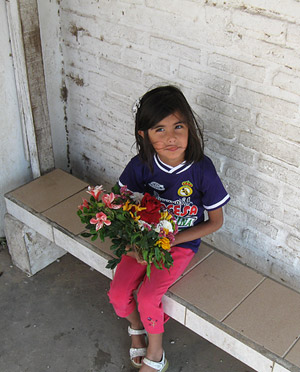 (Side note: Sara’s watch was way off, like 15 or 20 minutes off, and she kept insisting it was time for us to go in when in fact it was not.)

It turns out that Tio Adonay’s place in the cemetery was pretty close to the entrance we came in through. We didn’t walk far.

I had not realized he was buried in a crypt. Yoli explained that pretty much everyone is buried in mausoleums, because there’s not enough space to bury them in the ground.

His crypt doesn’t have a stone or a marker because at the time there wasn’t money for it. But Alcides took the initiative to write “Adonay Antelo” while the cement of the crypt “cover” was still soft. 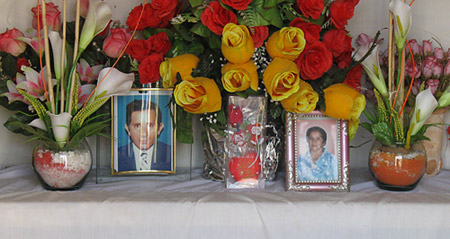 The mausoleum where Tio Adonay is buried belongs to his wife Miriam’s side of the family, the Guzmans. In the center of the mausoleum is a little remembrance area that has flowers and photos and decorations. A photo of Tio Adonay is at the left.

After some longer-than-planned naps and some miscommunication between Yoli and I, we headed off to visit Tia Miriam. We had a nice time, though the girls were hungry as usual (In fairness, our dinner was not substantial). But they had to wait until Tia Miriam began to serve some breads and hot chocolatey drinks. 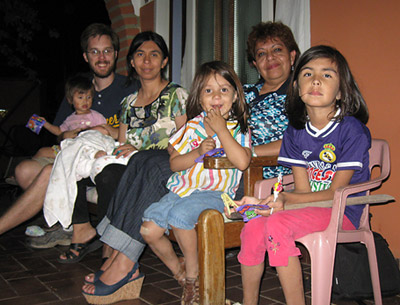 One thing we were sad to hear is about two robbers who have been a problem at their bookstore. They twice held it up at gunpoint while Tio Adonay was still alive, but after he died they came back and stole things several more times. Now Tia Miriam knows who they are (they live in the neighborhood) and has confronted them, and hasn’t had problems with them for a bit. But she lives alone, and it’s still a concern.

It’s at times like this that one feels angry for the inadequacy and corruption in the various Bolivian police departments. They charge a fee to investigate a case like this. The reason for this, Yoli says, is that they are poorly paid and poorly equipped (they don’t have money for gas, etc.).