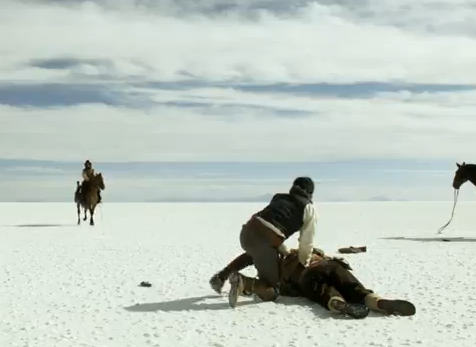 Last night Yoli and I watched a movie called “Blackthorn.” The premise is that Butch Cassidy and the Sundance Kid were not killed at San Vincente, Bolivia in 1908. The film follows Cassidy around 1928 as he prepares to come back to the United States.

It’s a great western, with action and twists. But the best part is that it was filmed mostly in Bolivia and has Bolivian actors in it.

“Blackthorn” shows off some of Bolivia’s most beautiful features, including the Salar de Uyuni, which I visited with Yoli in 2005. Cassidy has a ranch, possibly in Chuquisaca, and visits Potosi and Oruro among other places. The amazing landscapes and towns really make you feel like you’re in the right time period, and it also gives this western a different vibe (Bolivia has a different look than the American west).

The cast includes many Bolivians, and the story takes into account Bolivia’s history. Mining and colonialism definitely figure into it.

I can’t say enough about the film. Go rent it!