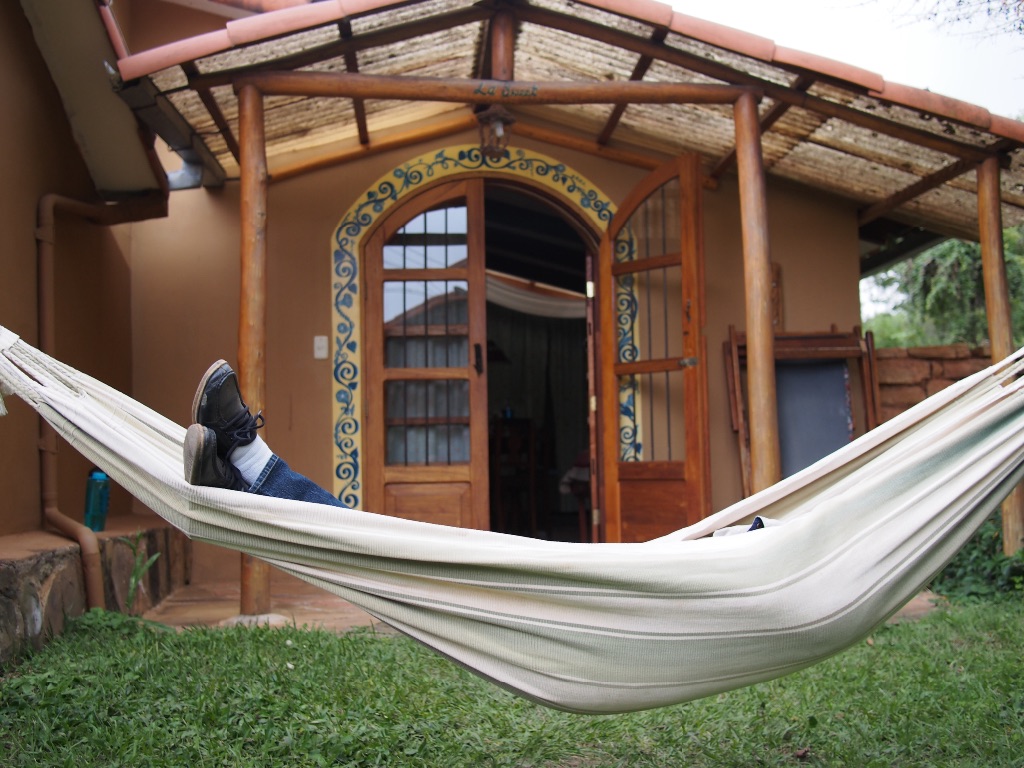 We had a great sleep in our little cabin/suite, called “La Sweet” at La Víspera.

Early in the morning before anyone else was stirring, I went to the café to see if I could connect to the Internet. La Víspera offers WiFi, but it is glacially slow. There is even a sign which asks guests not to watch YouTube or download videos. Given that it often took as much as ten minutes to check my email or refresh Facebook notifications, I’m not sure the sign was necessary.

The shower was a pleasant surprise. My experience has been that most places which serve foreign visitors in Bolivia provide hot showers using an electric shower head. I was delighted to find that in La Sweet, the shower had lots of hot water, but I saw no wires and felt no shocks.

La Víspera is a 15 minute walk uphill from the center of Samaipata. After showering and getting ready, we walked to town looking for breakfast. I felt like visiting a coffeehouse, but in Bolivia these are generally only open afternoons and evenings, when people have tea times. We went looking anyway, and to our great fortune we walked past a new business called “La Gatita”. The owner, Olaf, asked if we’d like a torta de manzanas with coffee. Of course we would!

Olaf’s wife Sandra had all sorts of pastries for sale inside such as a German apple cake (similar to one my uncle Oliver once made for us), and a lemon chocolate cake.
What a warm welcome they gave us. We chatted for a while. When Olaf learned that we lived in St. Louis, he pointed to a Wisconsin license plate on the wall and told us he had been to St. Louis during a yearlong trip around the U.S. in 1993.

Olaf and Sandra opened La Gatita in June. Prior to that, Olaf ran a tourist business in Samaipata for more than a decade. We told him we were interested in hiking and looking at birds and flowers. He advised us to visit “Zoologico El Refugio,” about 3 km outside of town.

Along the way, he said, we would likely find birds and interesting views to photograph. He pulled a birdwatching guide off his bookshelf and pointed out hummingbirds and other species we might see. Olaf suggested we take a taxi or a motorcycle taxi to the zoo, and walk back.
We thanked the couple and headed out. Feeling adventurous, we decided to walk the entire route to El Refugio, a dirt road winding across hills outside the town.

We stopped often to take photos. Sometimes it was a picture of a mountain vista, or a view back into town. Other times it was flora and fauna, like the tall poinsettias which grow here. And just as Olaf had said, we found a property that was swarming with hummingbirds. They zipped in and out of bushes with bright orange flowers, while we waited and tried to photograph them.

We were also surprised to stumble across “La Vaca Loca” (The Crazy Cow). During a previous visit, we had eaten at this restaurant in Samaipata’s plaza. We looked for it yesterday and were disappointed when we couldn’t find it. But here it was, outside of town. We resolved to eat there on the way back from the zoo.

Speaking of crazy cows, we came across cattle several times on the road, sometimes roaming free, other times being driven along.

During the last third of the walk, the road got muddy in places, and was crossed by a stream. In such cases, you do like Bolivians, and try to pick the direst path through.

The road isn’t well marked but there are a couple signs pointing the way to the zoo. At long last, we arrived.

El Refugio is literally a refuge for rescued animals. The zoo is run by a woman from Switzerland and staffed by volunteers from across the globe.

One such volunteer was Deborah Pomeranz from New Jersey. She told us she was volunteering for four weeks. As a volunteer, she works 8 hours a day, 6 days a week. In exchange for helping the animals, she gets free room and food.

As we walked around El Refugio, we saw all sorts of animals from monkeys to parrots to pigs. There was a playground for kids, plus a little store with incense, Bolivian handicrafts like vests and hats, jewelry, feather earrings, stone pendants and wall hangings.

We left the zoo and headed back to the Vaca Loca eager to eat a late lunch.

We decided to share a bowl of lentil soup and a grilled surubí fish, one of Yoli’s favorites.

We could see why the owner, Tony, chose to move this location four years ago. The views from the patio are stunning, and the weather was lovely. Also seated outside was a group of visitors from France.

The lunch was awesome and we followed it with homemade ice cream: strawberry and vanilla.

While we ate, a bird flew into the indoor dining room which is enclosed by glass. It kept banging into the glass trying to find a way out. Eventually it did.

Tony is from Germany. He told us he has lived in Samaipata for 11 years. The town gets have more visitors in summer, he says, after September. (The seasons are reversed from ours in the Southern Hemisphere). People like the temperatures, which never go higher than 86 F.

We hit the road and once we were back in town we asked locals for directions to a “panadería”, a bakery where we could find typical Bolivian breads baked each afternoon. We followed one man’s directions and we could smell that were we close. Another man pointed to the corner of Calle Saavedra and Calle Arenales, and said there we would find the best bread in town. We went inside and watched Doña Carmen dump loads of bread fresh from the oven into a basket in the front room. People were sitting in chairs, waiting for particular types of bread to finish baking.

We returned to La Víspera, and decided to walk up the hill from our cabin to find “El Trono” (“the throne”), a lookout spot near the top. As we climbed the winding path, we spotted a tall white-haired man in a grove of mandarin oranges. It was Peter, the owner of La Víspera. He told us he was from Holland and had run the natural retreat for 32 years. He and his wife have plans to retire and have put the place up for sale. They already have prospective American buyers.

After eating some oranges and saying goodbye, we climbed the rest of the way to the throne. This impressive stone seat with a commanding view of the town and the hills reminded me of Tolkien’s description of Amon Hen, the “seat of seeing” which Frodo visits near the end of “The Fellowship of the Ring.”

As evening drew in, clouds descended. We decided to head back to town for dinner. On Calle Sucre we were drawn to Ambar, a colorful artisan store and restaurant. A lady outside tried to talk us into eating there, but we weren’t in the mood for a giant meal. Instead, we were intrigued by a window just next door.

Its menu of hamburgers, sandwiches, burritos, and shawarma sounded just right. We ordered two chicken shawarmas with lemonade and visited with the owner, Serdar, as he prepared our food on a griddle at the window.

He told us he ended up in Samaipata four years ago, after traveling around. He built a business selling food from a cart in the plaza. Things went well and he later expanded into a full-blown restaurant.

The shawarma was delicious, and there was plenty of entertainment. We watched, mesmerized, as he and his two Bolivian assistants prepared orders placed by patrons of the bar La Bohéme from down the street. The cooking was quick and organized.

By this time it was starting to drizzle, and we decided to head back to our room just in case it might rain.

Back snug in our cabin, we checked my phone to see how far we had trekked that day. The number seemed almost unbelievable: 10 miles.