Last night was our last hurrah in Bolivia: Jesy’s quinceañera.

Yoli worked on a chocolate cake for her, but the decoration didn’t go quite as well as she hoped. Still, it proved very tasty.

We went over to El Jordan where the party was to be held. Lucy was there, but nobody else. It soon became clear that the party, which was supposed to start around 6:30 would instead start on Bolivian time.

END_OF_DOCUMENT_TOKEN_TO_BE_REPLACED 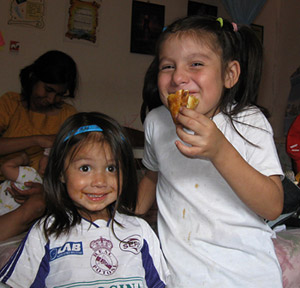 Thursday was Yoli’s birthday and her dad insisted we have a big meal of salteñas to celebrate. So we came over in the late morning to his place so Yoli could watch/learn/help him prepare the food.

A big wind had kicked up that lasted all day. Dust was flying all over the place. It was Ceti Alpha V come to life.

(How do you like that for a Star Trek II: The Wrath of Khan reference?)

END_OF_DOCUMENT_TOKEN_TO_BE_REPLACED

After several nice days at Cabañas de Traudi in Samaipata, it was time to head back to Santa Cruz — to celebrate Ludi’s birthday.