Last Friday I travelled with my family to St. James, Mo. for my younger brother Justin’s wedding. The weekend went well overall. I got to see many of my relatives that I haven’t seen in years. Most importantly, I think Justin and his bride Becca will be very happy.

Justin, my youngest brother Jon, my parents, and I all went to the wedding rehearsal to learn how everything was supposed to go. Immediately after that we went to the rehearsal dinner. Every member of the wedding party was there. This was the part of the wedding that my parents were in charge of (and had to pay for). It was very nice, and the food was good. I spent most of my time talking with Justin’s best man, Jon Fuchs, and his girlfriend, Rebecca. As my uncle Jerry pointed out repeatedly over the rest of the weekend, her name was quite a weird coincidence.

Later Friday night we went to Becca’s aunt’s house for a party. I talked with Becca’s brothers, who are all very nice. I was able to spend a little more time with some of my uncles as well. There were many people from Becca’s family there (since the wedding was in their town), but I didn’t meet most of them. I probably should have spent more time meeting new people. Oh well.

On wedding day (Saturday), Justin, Jon, and I all had to arrive 2 hours early to change into our tuxedos with the other groomsmen and ushers. The funny thing is that they put us into the church’s toddler preschool room. The toilet in the bathroom was tiny. Two of the guys tried to use it and had difficulty standing up when they were finished. It was very funny. But we were bored most of the time, because there wasn’t anything to do. Justin was quite anxious, understandably, but he seemed to do well.

Before the wedding began, I saw a copy of the program (which I designed) and it looked good. The church sanctuary was decorated very beautifully in a “winter” theme. 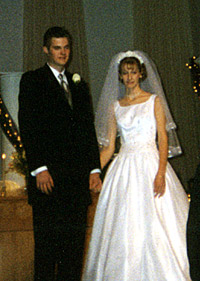 The ceremony itself was nice. The bride, groom, groomsmen, and bridesmaids were all standing on the stage, and the pastor was on the floor below us, near the steps to the stage. This was an unusual arrangement, but I liked it. Usually the pastor faces the audience and the wedding party’s backs are turned. Justin and Becca’s pastor had travelled from Kirksville (where they both live) to preside over the wedding and I thought he did a good job.

The downside to being in the wedding party is all the standing and waiting. After the ceremony was over, we had to stand at the end of the receiving line and greet all the members of the audience as they left the sancutary. That took forever, and obviously I didn’t know half the people. Then after that we had to take lots of posed photos witht he wedding photographer. Justin and Becca had it the worst, since they were in every photo.

But the advantage is that the wedding party eats first at the reception, since we are at the head table with the bride and groom. And that was nice. We left the church and came to the reception as soon as the pictures involving the parents and the groomsmen were done. While we waited for the bride and groom to show up, I got to talk with many of my relatives, including some of my great-aunts and great-uncles that I don’t often see. It was nice to talk with them and hear their stories, especially from my Uncle Merl, who was my Grandpa Renaud’s brother. My Grandpa Renaud was a character… the most choleric Choleric in history. But he died about 7 years ago, so we can only relive stories about him from the past.

Justin and Becca showed up and things were nice. The food was okay, not near as good as at the rehearsal dinner, but not bad. There was lots of dancing, cake eating, and mingling, etc. It was fun, but like all weddings, the reception lasted a long time. I was very tired, mostly from standing for so long.

Justin and Becca eventually left and everyone threw rice as they went to their car. They went to a hotel in town for the night, and their plan was to go to Branson, Mo. in the morning for their honeymoon. My family and all my relatives went back to our own hotel and spent several more hours in a big conference room eating and drinking (I had a coke, no alcohol) and talking.

All in all it was a good time. We got to see Justin and Becca again Sunday morning, since they had something Jonathan needed, and my dad had their marriage certificate. They seemed pretty happy!

5 Replies to “My brother ties the knot”