Yes, folks, here you go… 29 fabulous photos from the latter half of my trip. They turned out GREAT! I hope you enjoy them. 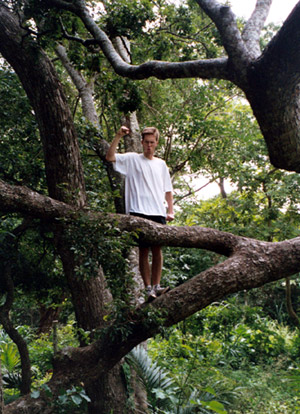 We thought it would be cute to take a photo with me in one of the trees…. that is until I got on the tree and discovered the huge black ants crawling all over it. 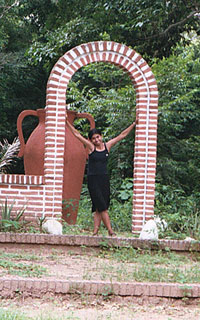 Look at the beautiful girl!

Here we are after deciding to leave the botanical garden because of all the mosquitos. You might be able to make out the name (“jardín botanico”) in giant letters behind us. 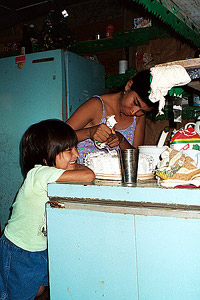 Yoli’s niece Jessi watches her decorate a birthday cake. We were going to celebrate the birthdays of Eliza and Noemi, two of Yoli’s sisters. As you might imagine, “Feliz Cumpleaños a Eliza y Noemi!” was a tight fit on the cake. 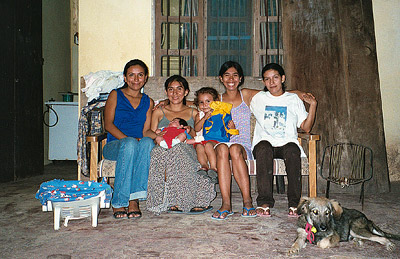 Here’s Yoli with some of her sisters and nieces sitting on the front porch. Orion, the dog, decided to join the fun, too. 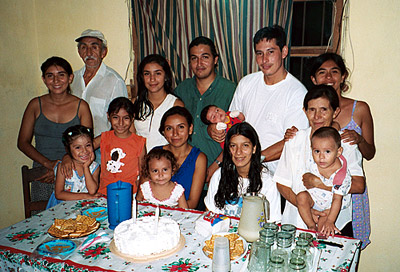 The drive to Samaipata was absolutely stunning. Here, I’m posing with Yoli on the side of the highway to Samaipata. The mountain behind us is not carved, it’s an entirely natural formation. It’s hard to tell from the photo, but we are actually on the edge of a cliff overlooking a long valley. We aren’t as close to the red mountain as it seems.

The camera is now pointing just a little below and to the right of the red mountain. You can see the river and a little farm.

We turned off the highway to Samaipata to go visit ruins on top of another mountain. We ate lunch high up on the mountain, just below where the ruins were located. As you can see from the mountains behind me, the view was spectacular. 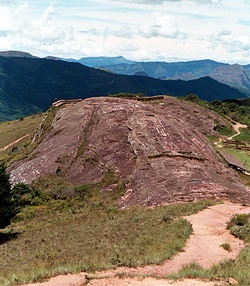 This is a photo of the main part of the ruins, taken from a viewing platform. They no longer allow visitors to actually climb on the ruins. This fortress served as a religious center, with a place for sacrifices and a burial area. There are animal representations carved into the rock, too. 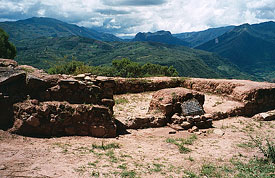 There were lots of houses, public buildings and other structures like this farther down the mountain.

After exploring the ruins, we came to the actual town of Samaipata. We stopped and took a coffee break, and then decided to try to visit the local museum (which we got free admission to by purchasing tickets to see the ruins). But when we got there, they told us they were closing in 15 minutes, so we had to go through it at hyperspeed. I took this photo of a little side street after we left the museum and began driving back to the highway. 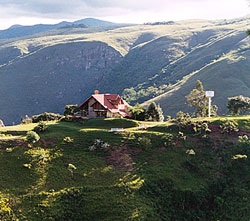 This is on the way back to Santa Cruz. Some rich person has an amazing pad situated on its little mountain between two larger mountains.

Here’s Juan with his wife Lucy, Yoli, and Alcides. We all went to Las Cabañas, a place with lots of little restaurants and other activities near the river. After eating, we decided to go see the river (the Piraí) and take a photo before going home. 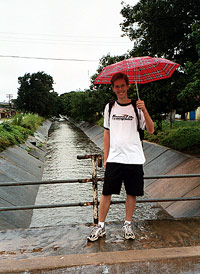 I’m standing in the middle of Canal Cotoca, which is an avenue with a giant canal in the middle. Normally this and other canals have little water in them. But this particular Saturday we had huge downpours, and the canals filled up quick. 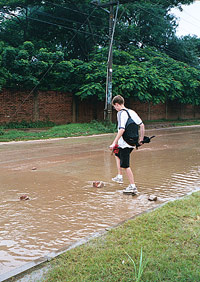 Someone ahead of us conveniently set up stepping stones here on the way to the Feria. The Feria is the place where I bought my 30B ($4) sandals. 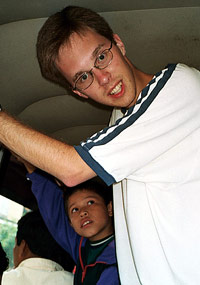 Coming home from the Feria, we had a very crowded bus that was also too small to allow me to stand up straight. I had this problem often, so we decided to take a photo. 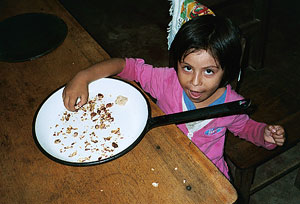 Yoli’s mom (Doña Lucila) had roasted some peanuts in order to make peanut soup for lunch, and she let me and Jessi eat some of them. Man, they were GOOOOOOD! 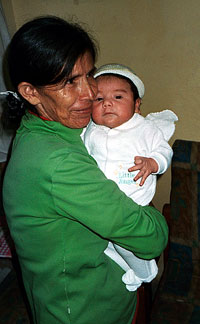 Here’s Doña Lucila holding Abigail. She was waiting for some torts to finish cooking, while Yoli and I were making pizzas for dinner for everyone.

I’m drinking some mate, which I loved. Mate is brewed sort of the opposite way from how we do it. The leaves and other stuff are put into the cup, with sugar. Then the hot water is poured into it. You sip through a straw which has a filter at the bottom which strains the liquid. 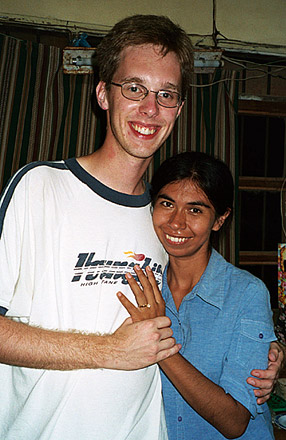 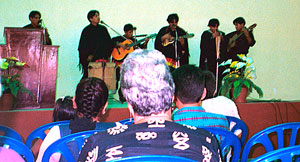 The Sunday after Yoli and I were engaged, we went to Alcides’ church. After the main service was over, there was a surprise. A musical group comprised of some brothers began playing awesome Bolivian music (with a Christian message).

Then, just when we thought it couldn’t get any better, their sisters came out and played some music. 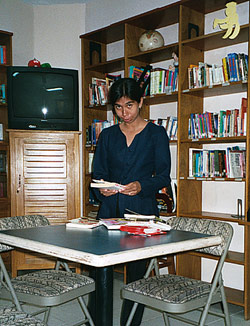 Here’s Yoli cataloging some books at El Jordán. She also teaches a typing class there. 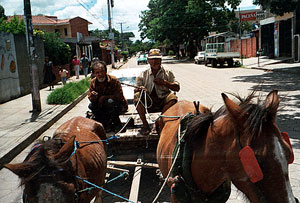 You never know what you’ll see in Santa Cruz traffic.

The day after the violence in La Paz, a gang of local kids decided to take advantage of the situation and loot some businesses. I took this picture the day after that. Most of the stores were emptied of everything, but this travel agency wasn’t… since travel agencies don’t have anything valuable in the first place. All the kids were eventually caught. 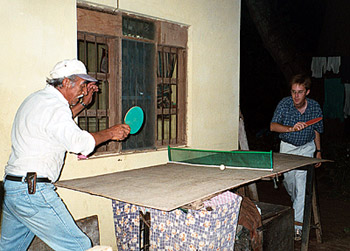 Don Hector and I have a spirited game of ping-pong the night before I left.

This is Wednesday night, right before we left for the airport. I wanted a picture with Yoli in the “Avenida Camote.”

Here we are at the airport in front of a ficus tree much like my Mom’s. Not long after this, I had to board the plane and take off.