At last it was time to say goodbye to La Víspera and Samaipata and return to the big city.

I woke early and climbed back up to El Trono to try to take more panoramic photos. I’ll have to stitch those together when I get back to St. Louis.

We ate the rest of our bread, cleaned up the cabin, and prepared to get a taxi.

The thing with taxis is that no matter how clearly you explain that you want something, such as an express taxi straight to Santa Cruz with no stops to pick up passengers, the drivers always seem to be unaware of the arrangement you made in the phone. One side of me thinks this is innocent; another side can’t shake the feeling it’s a ploy to charge higher fares, since it’s happened to us three times so far.

There was just one thing standing between us and Santa Cruz: the road.

It had been very rough coming up to Samaipata. But with a light rain overnight, it became even worse.

At one point traffic was stopped in both directions as a large bulldozer attempted to clear the road after another landslide. After a while, drivers force the bulldozer to stop and let them through. Then we watched as tiny taxis and enormous trucks took turns slip-sliding their way up the road. At times it seemed they might slide into us … Or slide the other way, into the ravine. 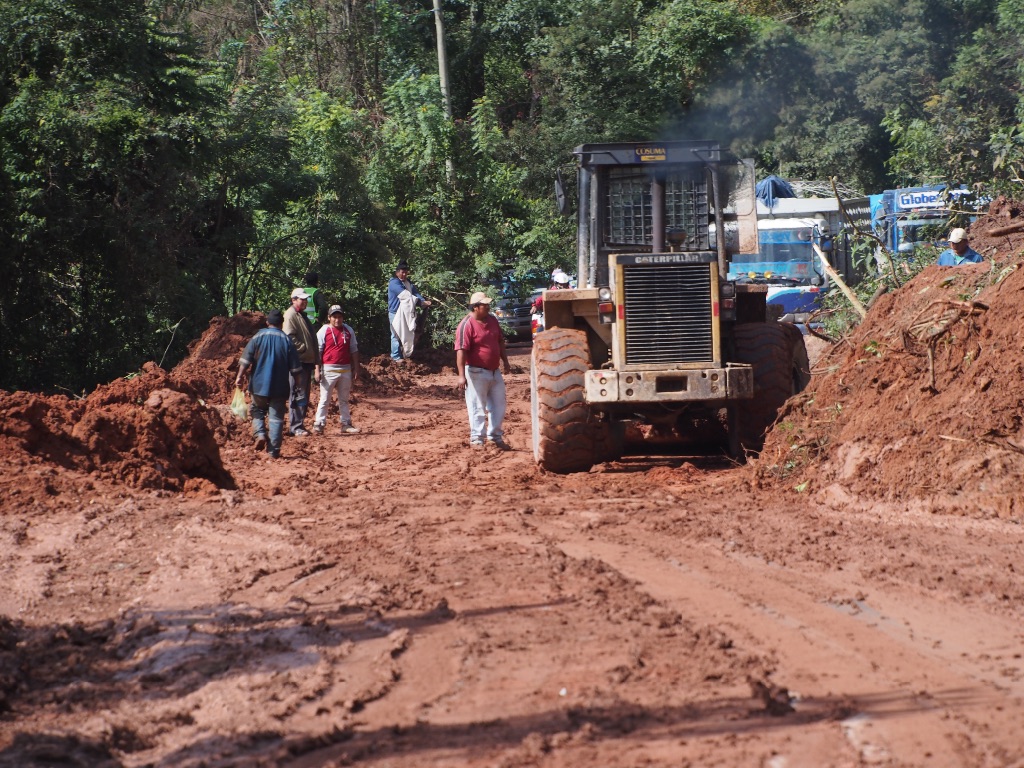 I have a video of this slip-n-slide but haven’t yet been able to upload it due to slow internet here. I’ll share it soon.

But, at last, we made it past that choke point. The road was bad all the rest of the way down the mountain, but we were going downhill and had an aggressive driver, so the return trip home seemed much faster.

After unpacking at El Jordán, Yoli went to a crochet class to give the ladies a friendship bracelet kit with thread and pattern wheels (looms). While she taught them how to make these crafts, I edited photos and blogged. At tea time, the ladies sent someone to buy fresh baked bread. Yoli didn’t want to eat because she wasn’t hungry, but the ladies insisted. You won’t have this back in the U.S., they said. Yoli couldn’t argue with that.

In the evening went went to the Iglesia Cristiana de la Familia, to attend the re-marriage of Yoli’s sister Eliza and her ex-husband Boris.

The two had been separated for five years, and eventually divorced. We were saddened by Eliza’s suffering over these years, and very happy to learn that they had reconciled.

There were many tearful and many joyful moments in the service, which was very beautiful.

It was also our first chance to see Yoli’s family and visit with them. We will get together again on Sunday.

2 Replies to “A rocky return and a reconciliation”