The front of the Torre de la Compañ de Jesus. We climbed up to the lookout point at the top of the tower to take the next few photos. 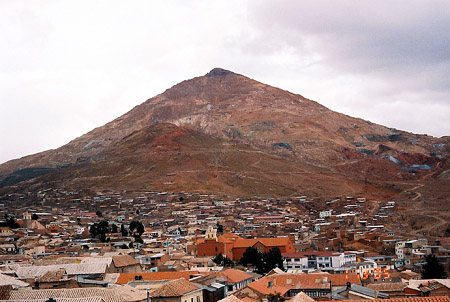 Cerro Rico (“Rich Mountain”), the main source of silver (and, therefore, wealth) for the Spanish Empire during the colonial times. Many poor miners still work in cooperative tin mines here, but the conditions are deplorable and life expectancy is extremely short. 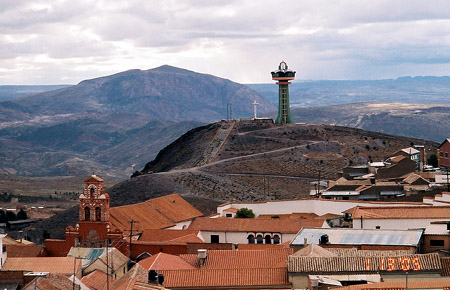 Another look at the Mirador outside of Potosí. In the bottom left you can see the front of the Santa Theresa convent.

I poke my head around the corner of the stone stairway that led up to the lookout point. This tight, dark spiral stair is like something out of Indiana Jones or the Lord of the Rings. 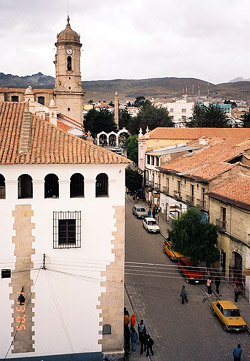 The big white building on the left is the Casa de la Moneda, the royal mint built by the Spaniards hundreds of years ago. This building is HUGE and it cost a fortune to construct. 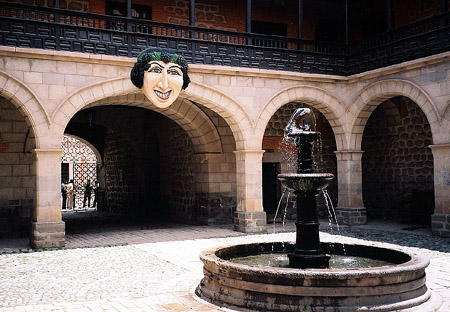 The main courtyard inside the Casa de la Moneda, including the famous face which has become the symbol of Potosi. 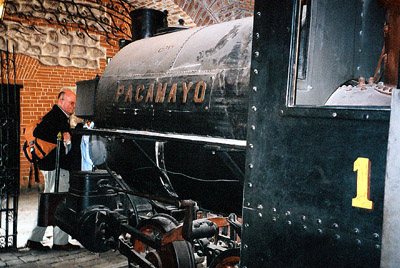 An old train inside the Casa de la Moneda. I think they said this was the first locomotive in the territory that later became Bolivia.

One of the huge animal-powered wooden presses, used for flattening the silver ingots into plates. These plates were later stamped and turned into coins. 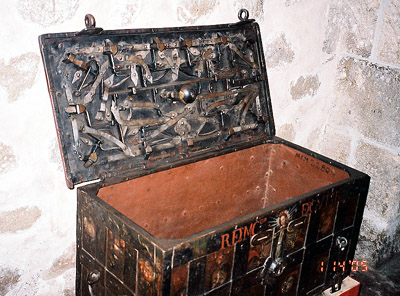 A strongbox for holding silver that was transported by sea back to Spain. The lock on the front is a decoy. The real lock was on top and covered by leather. As you can see, the lock mechanism is intricate. You didn’t just insert the key and turn it… You had to move it several times in certain directions and then it would open. 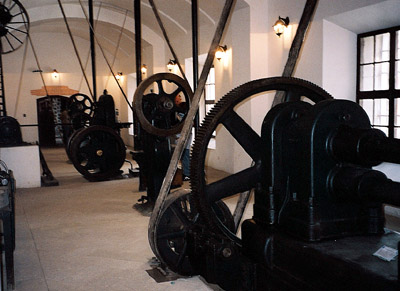 Steam-powered presses that replaced the older presses early in the 20th century.

After the Casa de la Moneda, we visited a restaurant built on the site of an old silver refinery. The ancient equipment has been transformed into tables and seats. What a cool place to eat a meal! 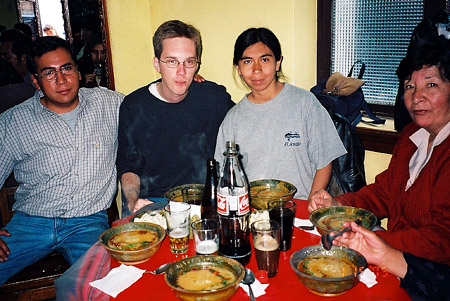 The family took us to the restaurant “Doña Eugenia” to eat k’alaphurka, which is a spicy corn soup.

What makes k’alaphurka so distinctive is that they drop a super-hot stone into it, causing the soup to bubble and belch like a volcano.